“Your needs and the Olympic athlete’s differ by degree not kind. Increased power, strength, cardiovascular and respiratory endurance, flexibility, stamina, coordination, agility, balance, and coordination are each important to the world’s best athletes and to our grandparents.” 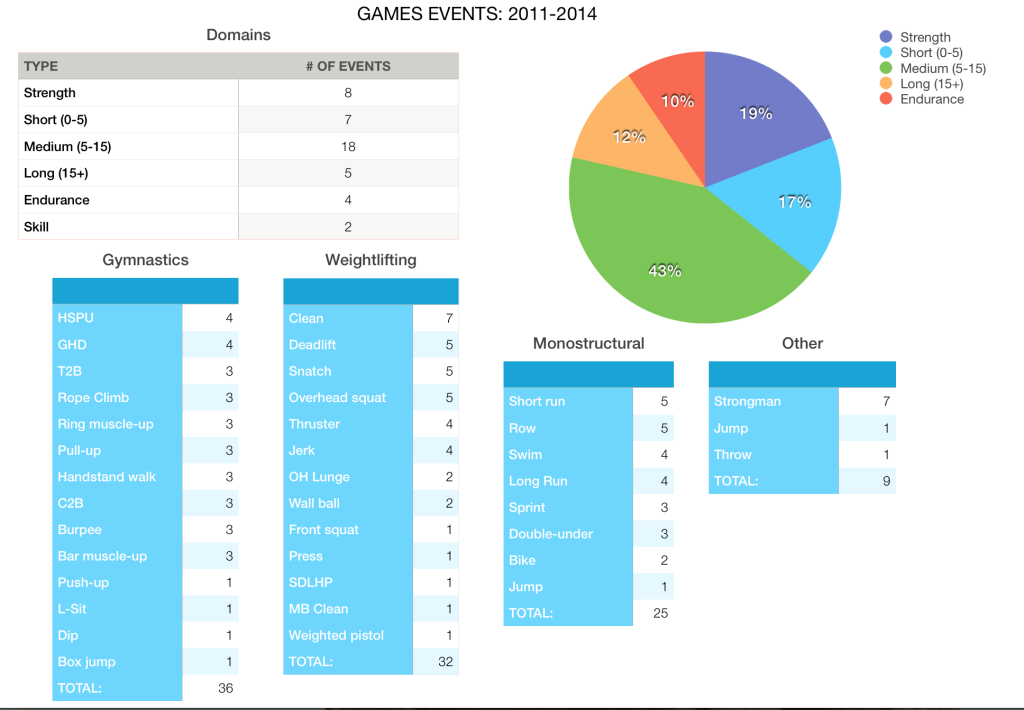 Every year around this time, every CrossFitter who pays any attention to the Games season is inspired by what they see, and it’s not hard to see why.  We watch the athletes at Regionals and wonder what it takes to get to that level of fitness and start asking ourselves some questions that are driven by a desire to rise to that level.  But more so than issues of nutrition, lifestyle, genetic potential, etc; questions about program design always are the ones that come to the forefront of those that want to act on the inspiration they feel.  Volume, biasing, skill and technique development, etc. are continuously probed by anyone who has spent time in the CrossFit world.  And every year, the temptation that many athletes have to chase programming “rabbit trails” reintroduces itself in ways that are different versions of the same type of misunderstandings that rise up about what should take priority in our training.  Considering everyone only has a limited number of training sessions before the next fitness test, how to see improvements as fast as possible will push many of us to reach for answers as to how to get that next PR, and the next, and the next in time to perform at whatever level an athlete has set their sights on.  With that said, putting parameters around what seems to be a series of open-ended questions about programming is always helpful to make sure we’re maximizing the results of our efforts.

If you look at the data above, you’ll see the domains of every CrossFit Games event between 2011 and 2014, as well as how many times each movement has been seen in an event in that same time frame.  Obviously, this doesn’t count in point totals for each event, loading, whether the events were couplets, triplets, chippers, etc, but I think what you see does do a quite a bit to help us understand that in terms of programming for the CrossFit Games, or programming for our classes at CFA, there is less variation from what is at the core of the program than you might expect.  It shouldn’t come as a surprise that even at the highest level of competition, six out of every ten events over a 4 year period have been between 1-15 minutes in length for those that won those events.

To be fair, trying to draw too many conclusions from this sort of simple data can cause more problems than it solves.  But one of the major principles that jumps out to you is that even at the highest level, you can be a middle of the pack lifter, middle of the pack endurance athlete, etc.  But you CANNOT be middle of the pack or deficient in the short, intense metabolic tests that include the usual suspects as far as the movements that are staples of the CrossFit program.

But more-so than even the types of workouts any CrossFit athlete needs to be proficient at, it’s irresponsible to not emphasize that it’s what happens when you make the bulk majority of your training in the 5-15 minute domain, focusing on proficient technique and relentless intensity does to the improvement of every other domain that may need to be improved on or that will be tested.  This doesn’t mean that we discount where there may be holes in any one athletes fitness through strength development, positioning and technique work in olympic lifting, gymnastics skills, going “long”, etc.  But what it does mean that if those holes are being filled in at the expense of another hole being dug in an area that is even more essential to performing at a high level (a.k.a, being fit), then we’re missing the boat and not only won’t be able to “perform”, but what is being left on the table in terms of the health and vitality we all feel outside of the gym will also suffer.

And of course, it has to be noted that the further along you get in the Games season, the further you have to deviate from being proficient at more than your traditional 5-15 minute metabolic sessions.  For 99.9% of us, with the demand of life outside the gym, limitations because of genetics or prior athletic development (or lack thereof), we are best served to dive even deeper into the core of the program, and keep first things first.